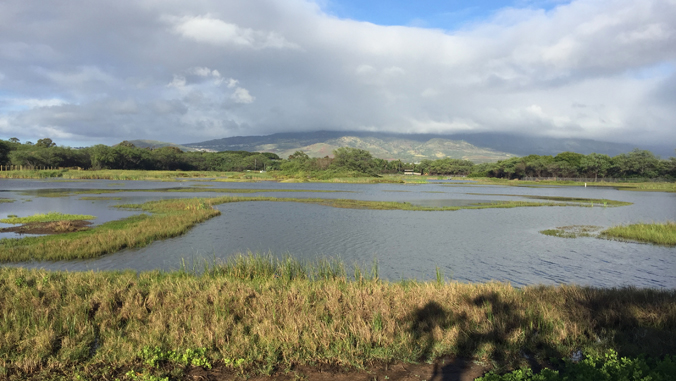 The future of Oʻahu’s primary water source may be in jeopardy if current water withdrawal rules remain unchanged. According to University of Hawaiʻi at Mānoa researchers, the current sustainable yield (the maximum rate that water can be withdrawn from aquifers without compromising human and ecological uses) estimate for the Puʻuloa (Pearl Harbor) aquifer at 182 million gallons per day (MGD) could be a large over-estimate and may need to be reconsidered.

Even without considering climate and land-use change, the UH research team estimates sustainable yield at 151 MGD, which could decrease to 113 MGD by mid-century under a dry future climate scenario (set by the Intergovernmental Panel on Climate Change) combined with further urban sprawl and watershed degradation.

Withdrawing too much water from the aquifer will not only impact the island’s drinking water source, but would also negatively impact culturally and ecologically important springs that feed areas such as the Sumida Watercress Farm, loʻi kalo systems, coastal wetlands and nearshore ecosystems. Adequately protecting springs and submarine groundwater discharge will require reducing sustainable yield estimates even further.

A team from the University of Hawaiʻi Economic Research Organization (UHERO) in the College of Social Sciences, the Water Resources Research Center (WRRC), the Hawaiʻi Institute of Geophysics and Planetology, Pacific RISA and the National Science Foundation-funded ʻIke Wai project at UH said this research shows the amount of water that can be safely withdrawn from the Puʻuloa aquifer in the future may be significantly less because climate change is expected to reduce rainfall, the source of fresh water to the aquifer. They also say “protecting mauka watersheds from high-water-use invasive tree species, which can further reduce groundwater recharge, is critical in the face of such change.”

The UH Mānoa researchers acknowledged that Hawaiʻi has among the most progressive water laws, which is rooted in Indigeneous management principles. However, accuracy of the current estimates is limited due to the lack of comprehensive data and shortcomings of the model (the Robust Analytical Model 2) used by the State to determine sustainable yield limits. The research team said such a model is a “bathtub” type that ignores the spatial distribution of various inflows and outflows including well withdrawals, and does not directly consider some public trust uses (for example, maintenance of waters in their natural state and exercise of Native Hawaiian traditional and customary rights) or climate and land-use change.

To assist in developing a more comprehensive analysis, the research team conducted two related studies on the Puʻuloa aquifer, which provides two-thirds of Oʻahu’s drinking water.

In addition to the significant overestimate of the sustainable yield limit for the Puʻuloa aquifer, results showed that protecting all of the native forest in Puʻuloa from high water-use invasive plant species could prevent an additional loss of 12–15 MGD of groundwater recharge. This results in watershed protection increasing sustainable yield by 8–12 MGD, which translates into $27–40 million in annual savings in water supply costs after 50 years. The research team said the savings are based on the costs of supplying water over time as it increasingly becomes scarce, including the need to shift to a costly groundwater alternative like desalination.

“This research suggests a need to revisit sustainable yield in the Puʻuloa and other aquifers across the state to ensure the protection of water for the multiple ways that people use and value this resource in a context of changing land use and climate,” lead author Leah Bremer from UHERO and WRRC said. “It also suggests that native forest protection can play an important role in reducing the combined impacts of land-use and climate change on groundwater resources.” However, the research team also cautions that, “more data on the ecohydrology of forests are needed to further refine this estimate.”

This work is an example of UH Mānoa’s goals of Building a Sustainable and Resilient Campus Environment: Within the Global Sustainability and Climate Resilience Movement (PDF) and Excellence in Research: Advancing the Research and Creative Work Enterprise (PDF), two of four goals identified in the 2015–25 Strategic Plan (PDF), updated in December 2020.