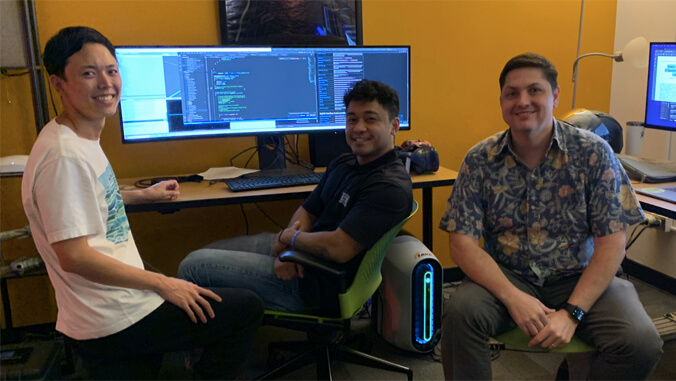 A University of Hawaiʻi at Mānoa team of Information and Computer Sciences Department graduate students took home $10,000 as one of two winners in the student division of a national hackathon competition. Their project, CyberCOP (Common Operating Picture), is a virtual reality application designed to support cyber operators in denied, degraded, intermittent or low-bandwidth environments.

PhD student Yoshiki Takagi, and master’s students Michael Rogers and Roderick Tabalba, presented their project to military leaders on May 25 in the final round of “Reality Bytes: Visualizing Cyber Operations,” hosted by the National Security Innovation Network (NSIN). During electronic or cyber attacks, CyberCOP alerts users and automatically reroutes network traffic based on a modified shortest-path algorithm, optimized for network capacity.

Takagi, Rogers and Tabalba are students in Professor Jason Leigh’s Laboratory for Advanced Visualization and Applications (LAVA). CyberCOP was based on SatWatch—believed to be the first-ever virtual reality application for visualizing satellites orbiting the Earth. SatWatch was the work of LAVA undergraduate National Science Foundation Research Experiences for Undergraduates student, Ryan Theriot, who became a full-time research software engineer at LAVA.

“We were thrilled to be part of this hackathon and to win was a big surprise to us,” Rogers said. “None of us had competed in this type of event before, but luckily, we had the skills and experience from working at LAVA to help us succeed.”

Rogers added, “We would like to give a special thanks to our professors Jason Leigh and Mahdi Belcaid for their support and encouragement throughout the course of the hackathon. We would also like to acknowledge Ryan Theriot for giving us full access to his code for viewing satellites in virtual reality, which allowed us to build a working prototype of our solution in under a week. We will be splitting the money evenly across the team members to continue sharpening our skills in computer science.”

Five undergraduate students made up Cyberworld, which was named one of two finalists in the student division of the competition. Cyberworld’s solution focused on gamifying data sets within the Unity platform (development site for various industries across games, animation, automotive, architecture and more) for cybersecurity operators to make them more engaging. This is done through an interactive and informative 3D map with real-time data for quick access in each country and using an avatar.

UH’s Office of Innovation and Commercialization is one of 25 educational institutions that have partnered with NSIN to help build innovators who generate new solutions to national security problems in the U.S. Gloria Choo is NSIN’s inaugural university program director at UH.

“Reality Bytes in partnership with UH and several other universities helps identify and support the research talent that our university has,” Choo said. “This is also about building and fostering a community of practice and networks that can solve our real world challenges in the Department of Defense.”

This program is an example of UH Mānoa’s goals of Excellence in Research: Advancing the Research and Creative Work Enterprise (PDF) and Enhancing Student Success (PDF), two of four goals identified in the 2015–25 Strategic Plan (PDF), updated in December 2020.