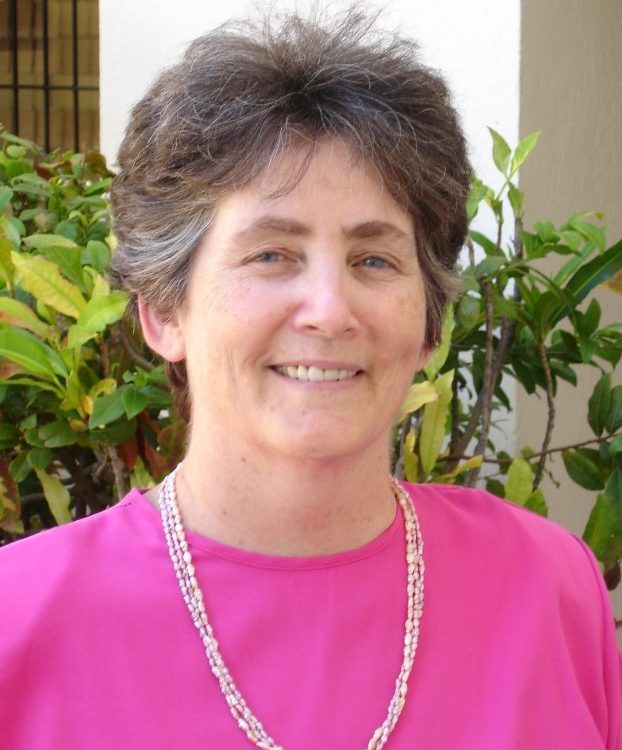 Deborah earned her B.Ed (Secondary Mathematics) and M.Ed. (School Leadership) from the University of Hawai`i. She enjoyed the computer science courses that were a part of her undergraduate degree – and this led to her first career: computer operator, then programmer and systems analyst at United Bank and then at Colorado State University in Ft. Collins, Colorado, Giant Food in Landover, Maryland, and finally Foodland in Honolulu, Hawai`i. But the drive and passion to teach mathematics was strong, and she traded in her coding pad and punched cards for a chalkboard. Joining the faculty at Sacred Hearts Academy in 1985 was transformational. The all-girl school offered a one-semester Intro to Computers class (with the Commodore 64) which she taught in addition to math classes. Over the years, she helped expand opportunities for her students to experience the rewards of pursuing science, math, and technology. While math classes were always at the top of her “favorites” list, Deborah opened the world of logic and technical skills to her students years by also teaching courses in programming (Basic, C++, and Java), web design and HTML, introductions to computer science and engineering. A result of earning a GTE G.I.F.T. award for Math-Science collaboration in 1994, she and the science department chair developed and team taught “Exploring Earth and Space with Technology.” This meant guiding students along the fledgling Internet (not yet the super information highway of today) and literally learning along with them. Receiving the Tandy Technology Scholars Award in 1995 and the Presidential Award for Excellence in Math and Science Teaching confirmed her commitment to bringing real life technology experiences to her students. Earning the Demana-Waits Vision Award in 2000 launched Deborah into the world of Teachers Teaching with Technology as a National Instructor, training other teachers so they could share the excitement of learning with and about technology with their own students. And back at Sacred Hearts Academy, coaching the math team, mentoring the student programming team as the school joined the FIRST Robotics movement with FRC competition, developing a Digital Engineering course and coaching multiple CyberPatriot (computer network security) and Real World Design Challenge teams, and advising and instructing the Girls Who Code Club guaranteed that Deborah modeled life-long learning while demonstrating the joys that hard work, persistence, and positive attitudes bring. Exploring and creating opportunities in STEM fields was always a major thrust. Receiving the Hawaii Affiliate NCWIT Educator Award validated the commitment she has to opening the world of possibilities in data science and computer fields to young women.