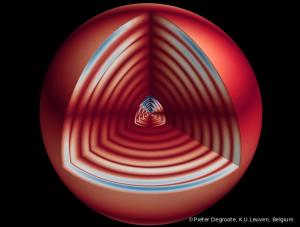 What does our own galaxy look like? It’s hard to tell because we are inside. A new project, led by University of Hawaiʻi astronomer Dan Huber, will change that. Huber and his team are planning to create the largest 3D map ever constructed of stars in the outer regions of the Milky Way, with a new grant from the National Science Foundation (NSF).

The team will use data from ground-based survey telescopes—including the Asteroid Terrestrial-impact Last Alert System (ATLAS) on Haleakalā, developed at the UH Institute for Astronomy (IfA), and the All-Sky Automated Survey for Supernovae (ASAS-SN), developed at Ohio State University with IfA as a collaborator. Astronomers will measure brightness variations over time for hundreds of thousands of distant stars in the Milky Way. They will then apply a novel technique to precisely measure the stars’ distances, placing them in their correct 3D location.

This project will explore the origin and evolution of the Milky Way, which is home to our solar system and billions of stars. The outer parts of the galaxy are shaped by encounters with smaller satellite galaxies, so the 3D map will provide insights into how our galaxy has formed and changed over time. The results will help place the Milky Way in the context of other galaxies, leading to a more complete understanding of the origin of our universe.

“Galactic astronomy has entered a golden era, due in large part to the European Gaia space mission. However, Gaia distances alone are limited to a relatively nearby region, so we had to come up with a different way to measure distances to make a full map of our home galaxy,” explained Huber.

“The solution to this problem is to use existing data from ground-based transient surveys such as ATLAS and ASAS-SN,” explained IfA astronomer Ben Shappee. “They have years of data from networks of fully-robotic telescopes monitoring the entire sky for potentially hazardous asteroids and rapid, dramatic phenomena like supernovae and tidal disruption events.” The team will use this data to carefully study how stars oscillate—a technique called asteroseismology—to measure distances for hundreds of thousands of red giant stars in the outer galaxy.

These distances will expand the dynamical map of our galaxy by more than a factor of 10 over Gaia alone. This will unveil how the Milky Way has grown, collecting stars from orbiting dwarf galaxies and gaseous material from the cosmic web. The motions of the stars will provide a detailed map of the gravity—and hence the mass, including mysterious dark matter, in our galaxy.

The NSF grant will also fund a summer research program for Native Hawaiian college students in an effort to increase their representation in STEM at the graduate level. Every summer, five undergraduates will spend 10 weeks in residence at UH Mānoa, working on projects that will result in peer-reviewed scientific papers. Students will also be funded to share their research at national conferences, and participate in professional development through the IfA’s successful NSF Research Experiences for Undergraduates program.

“One of the most exciting aspects about this project is its interdisciplinary nature, combining different fields in astronomy to learn about our place in the cosmos and inspiring the next generation of scientists here in Hawaiʻi,” said Huber.

Team members Professor Sukanya Chakrabarti (Rochester Institute of Technology) and Professor Robyn Sanderson (University of Pennsylvania) are world-leading experts in galaxy formation and evolution. They will use the 3D map constructed by Huber and his team to refine models of our galaxy and participate in the undergraduate research program.