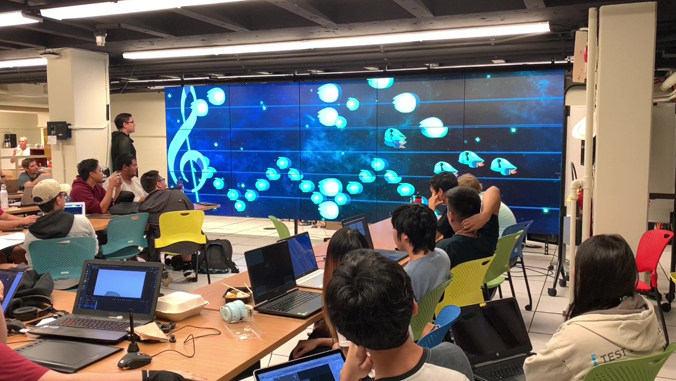 Sixty-two students at the University of Hawaiʻi at Mānoa Academy for Creative Media (ACM) and Laboratory for Advanced Visualization and Applications (LAVA) will showcase their works at SIGGRAPH 2020, one of the largest and most prestigious annual conferences for computer graphics and interactive techniques.

Originally planned as an in-person event in Washington, D.C., the conference will be held virtually from August 17–28, due to the COVID-19 pandemic. The pieces were submitted by ACM Assistant Professors Brittany Biggs and Laura Margulies, and ACM and Information and Computer Sciences (ICS) Professor and LAVA Director Jason Leigh.

“ACM Mānoa is very proud of the accomplishments of the students in ACM/ICS,” ACM Mānoa Chair Christine Acham said. “The sheer number of projects that have been recognized also speaks to the mentorship of the professors Brittany Biggs and Laura Margulies as well as LAVA Lab Director Jason Leigh. As the program continues to grow, I look forward to celebrating their continuing accomplishments.”

“Conferences like SIGGRAPH are a great way to network and jumpstart careers,” Biggs said. “Being able to highlight that their work was showcased at SIGGRAPH is a significant accomplishment and one that will help their resumes stand out to recruiters and hiring managers.”

Pieces from three of Biggs’s courses will be highlighted at the conference. They included completed projects from a “minion style character” assignment, where students had to model, texture, rig and pose a minion-style character (a cylindrical shaped character with arms, legs and a face); a compilation of short 3D character animation performances that focused on a certain action while also exhibiting personality; and two short, animated films produced by group teams

“The most memorable piece for me from these assignments is witnessing the excitement students experience when creating something from nothing—whether it’s creating a digital environment from scratch, breathing life and personality into a digital character, or visually sharing a story they’ve only envisioned in their minds,” Biggs said.

Works from Margulies’s courses included a compilation of short 2D character animation performances that focused on a certain action or technique; and short, animated films that were experimental in nature, method, content, tone or presentation.

“These high quality works show strong personal and artistic visions,” Margulies said. “While the projects started with specific prompts, these students took the idea and grew them, following their own inner narrative. The creative pieces that resulted are original and surprising and bring something new to animation.”

Featured works from Leigh’s course involved working in teams to develop a multiplayer video game for a 20-foot tiled display wall with a resolution of 10K x 3K. Leigh said creating video games will not skip a beat during the COVID-19 pandemic.

“Developing video games is one of those things that is easy to do during a pandemic lockdown,” Leigh said. “You just need computers, imagination and some technical, artistic and musical skills. That’s what you get when you combine students from computer science, creative media and music together.”