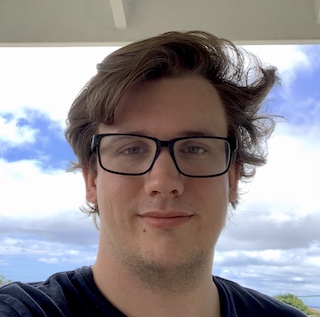 Oscar originally moved to Hawaiʻi to pursue an undergraduate degree in Marine Biology alongside a minor in computer science. During this time, he became interested in the diversity and dynamics of oceans microbes and was also introduced to how computers could be used to better understand them. Following the completion of the undergraduate degree he continued his studies at UH Mānoa to pursue his interest in better understanding ocean microbes through the utilization of computers.

Oscar is currently engaged in utilizing large scale public genomic datasets to better understand marine microbial life. They hope to supplement in-house datasets with these public datasets to be able to make broader conclusions regarding the dynamics of the marine bacterial clade SAR86. Additionally, they are also interested in methods to make bioinformatic research easier to run, more reproducible, and more scalable to be able to incorporate new datasets.