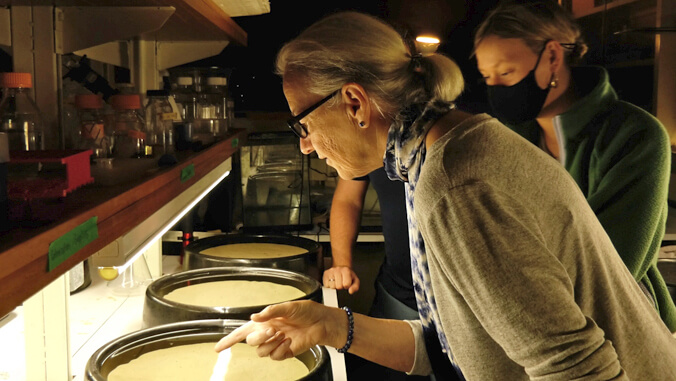 The University of Hawaiʻi at Mānoa’s pioneering microbiome researcher Margaret McFall-Ngai has been named the inaugural director of a newly created research division of the Carnegie Institution for Sciences that will focus on life and environmental sciences.

“Margaret McFall-Ngai helped develop pioneering cross-disciplinary research here at the University of Hawaiʻi on the interaction between humans and the environmental microbiome. She’s broken new ground with her own research on Hawaiian bobtail squid at the Kewalo Marine Lab, which has influenced many students and scientists here at UH and beyond,” said UH President David Lassner. “But more importantly, in her years here with us, Margaret has helped us all think differently about life sciences and she has led the cultivation of our next generation of creative and collaborative researchers and students, who are helping us understand and care for our ʻāina and therefore our people.”

McFall-Ngai has applied for an emeritus faculty position and a non-compensated appointment, which would allow her to continue to write grants with researchers at UH Mānoa, which she says is now viewed as a major microbiome research center.

In 1996, McFall-Ngai became the first tenured woman at the Kewalo Marine Laboratory. She left in 2004 for the University of Wisconsin at Madison and held a number of prestigious appointments before returning to UH in 2015 to serve as director of the Pacific Biosciences Research Center (PBRC). Much of her research focuses on the relationship between the Hawaiian bobtail squid and the luminescent bacterium Vibrio fischeri. Using this model, she and other researchers are studying how the microbiome shapes various aspects of animal and plant life, including development and longevity.

In 2017, a group of cross-disciplinary researchers, including McFall-Ngai were one of the winners of the UH Mānoa provost’s inaugural Strategic Investment Competition. That initial $700,000 investment helped to create the Center for Microbiome Analysis through Island Knowledge and Investigation (C-MĀIKI). Since that initial investment, C-MĀIKI has generated more than $14 million in extramural funding to support research and curriculum development. Through it all, McFall-Ngai has served as one of the key advisors to the group.

“They are people who study the microbial world—what we call the Earthʻs microbiomes. And those microbiomes are at the basis of health of absolutely everything,” she said. “From the oceans to the soils to the forests—every animal is impacted by interacting with the microbial world and every plant.”

In 2018, the W.M. Keck Foundation awarded $1 million to a cross-disciplinary group of researchers headed by McFall-Ngai for a groundbreaking UH project that established the Waimea watershed on the north shore of Oʻahu, Hawaiʻi as a model microbiome mesocosm⏼that is, a study site small enough to thoroughly investigate but large enough to reveal the complexities of natural systems. It was the first study of an entire watershed, from ridge to reef, to map its microbial communities and their ecosystem processes.

That same year, McFall-Ngai, was selected to receive a MERIT award of more than $5 million from the National Institutes of Health (NIH). MERIT or Method to Extend Research In Time awards have been offered since 1986 to “distinctly superior” investigators who have demonstrated high levels of competence and productivity in previous research efforts and “who are highly likely to continue to perform in an outstanding manner.”

McFall-Ngai and Researcher Ned Ruby served as principal investigators for a $10.4-million grant awarded in 2019 to a cross-disciplinary group of junior researchers from the NIH Centers of Biomedical Research Excellence (COBRE) to support the first center focusing on the interface between environmental microbiomes and human health.

Many of the researchers who are part of the COBRE grant are housed in UH Mānoa’s new Life Sciences Building. The aim of the three “cores”—microscopy, insectary and molecular biology/biochemistry—are to develop the tools to understand the interface between human and environmental health, and the microbial forces at work.

“The COBRE is a gift to UH. It is the opportunity to create an active center for the study of the dynamic relationship between Earth’s microbiomes and human health,” McFall-Ngai said. “This gift will not only benefit researchers at UH, but the center has every opportunity for being a mecca for researchers from across the nation and around the world.”

With McFall-Ngai’s and Ruby’s departures, other UH scientists will assume principal investigator duties for the COBRE grant.

“What I was hoping for with the COBRE core is that we might become something like a Smithsonian tropical research institute, but in the central Pacific for people who want to study the interface between the microbial world and other aspects of the environment,” she said.

Lassner concluded, “We will forever be grateful to Margaret for leading Hawaiʻi to the vanguard of environmental microbiome research and we look forward to our future collaborations as she assumes her new post at the Carnegie Institute for Science.”