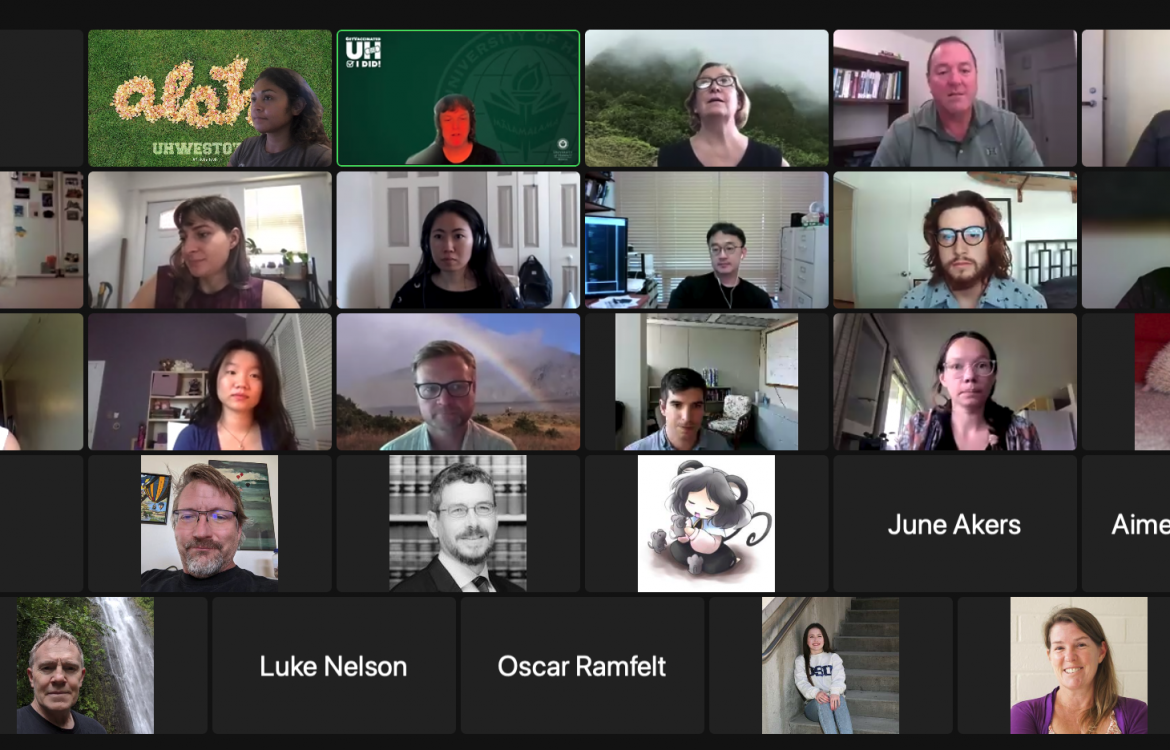 CITRUS doesn’t only pertain to lemons and limes this summer

The program resulted in over 199 hours of data training which averaged about 16 -17 hours for each student. This initiative was designed as a research experience for undergraduates (REU), immersing students into a lab setting. The program concluded with climate-focused research projects created by students using their newly honed cyberinfrastructure skills and abilities, including programing in python, data movement, data visualization, data wrangling, high performance computing and many more.

Students’ final presentations included topics such as wave height predictive modeling, the impact of landfills on climate and the war in Ukraine’s impact on food security. All the presentations had real life applications and were researched, created and presented at the end of the program. Participants were mentored by Hawaiʻi Data Science Institute members and graduate fellows, which CITRUS program students said were great sources of knowledge in assisting them with their projects.

Undergraduate student Alyssa Chau from KCC, an 18-year-old from Taiwan who is planning on double majoring in sustainability and Pacific Island Studies, concentrated her research project on the correlations between flood hazard zones and vulnerable communities. She spoke about the risks of flooding that happens in Hawaiʻi and how that can affect and damage Hawaiian culture and traditional practices such as loʻi Kalo (taro) cultivation and fishpond maintenance. She concluded her presentation with a quote, reflective of Dr. Alex Stokes’ teaching, ”Data is storytelling”. Dr. Stokes is a UH Mānoa Assistant Professor and lead of the CITRUS program.

Another student who presented was Joel Nicolow, a junior at the University of Hawaiʻi at Mānoa majoring in Computer Science and minoring in Public Health. His research presentation focused on using image recognition techniques  to detect fog on Oʻahu’s highest peak, Mount Kaʻala and its implications on future research. Monitoring fog frequency, elevation and associated atmospheric conditions such as temperature and relative humidity would facilitate future quantitative analysis and a better understanding of the impact of different variables.

Nicolow was awarded funding for his four cameras that are placed on Mount Kaʻala’s windward side from the Associated Student Government at University of Hawaiʻi (ASUH). As the highest point in Oʻahu, Mount Kaʻala was the perfect place for Nicolow’s fog research. Nicolow also mentioned in an interview that he would love to see less human interference with public coastlines in residential areas, expressing that seawalls should be built with more thought and to let the islands naturally erode as they would without human intrusion.

UH Mānoa and LCC graduate, Steven Camara joined the CITRUS program with a more extensive background than some of his peers. His background included medical work with a specialization in Cyber security and defense for the U.S. Navy. Camara approached his research in the program slightly differently from other students, making it more of a personal capstone of the storytelling of data science in connection to the impacts of climate change. According to Camara, he walked away “trying to find a solution,” spurring connections outside of CITRUS and UH. Camara worked with colleagues from Dartmouth and Harvard to continue his interest in climate-geared data science. He claims data science is a “weapon” of knowledge, with CITRUS training him to bear it.

All participants in the CITRUS program showed immense gratitude for their mentors, Alex Stokes, Peter Sadowski, Guiseppe Torri, Yin Phan Tsang, Ryan Longman and Sukhwa Hong. Through this innovative, cross-institutional and multi-disciplinary program, students from across nine majors including Civil and Environmental Engineering, Business and Geography were able to collaborate and integrate data science tools to probe climate-centric questions.

-By Lizzy Marine and Tori Miranda